skip to main | skip to sidebar

The following is an exhibit I cannot wait to see! It opens in few days and I am heading up to two major long shows, the Tempe Festival of the Arts and the Indian Wells Art Festival, one after the other and right at the opening of:


This spring encounter the marvels of the world’s finest collection of Pre-hispanic gold, on loan from the renowned Museo del Oro of Bogotá, Colombia. National treasures and more than two hundred other exquisite gold figures and ornaments in this stunning exhibition give testament to the unparalleled mastery of gold, a sacred material considered a gift from the gods.

[“For more than 2,000 years the diverse cultures living deep within the highlands and along the coasts of Colombia perfected metalworking technologies still practiced today. Crafting gold into ornaments for adornment and for ritual offerings, they captured the astonishing detail, complexity and beauty inspired by the riches of the natural world around them. Sacred and symbolic animals, spirits and humans were represented singularly and in marvelous combinations with the purpose of visually communicating a sophisticated understanding of the universe and everything within it. The arrival of Spanish conquistadors in the 16th century brought attention to a “golden people” adorned from head to toe in gold ornaments and gold powder, thus fueling the myth of the lost city of gold – El Dorado, [and bringing an end to one of the most extraordinary epochs of American art.“]

It is interesting for me thinking of how a population can end, against another one that wants to expand. I see the spirit of conquer and the fascination of discovering new worlds, but forgetting giving respect to the native people is an act I hardly understand.
The integration of knowledge, the sharing of life styles and the discovery of far away populations is what I would bring back to my country, had I “conquered” it. But of course I live in Modern Times!

So, “Art Never Ends, It Transforms...”
Those populations were masters in the Arts of Craft, Style, Math, Physic and Engineering and, who knows, probably cooking too. That’s what we do too, in our times. We run numbers and build buildings, we create objects. We drive cars instead of walking and are definitely less slim than they were; we paint our hair instead of our bodies, although some of us like Tattoos!
This is Art, the same Art as those people’s… just transformed by the epoch we live in.

On the Road Again! 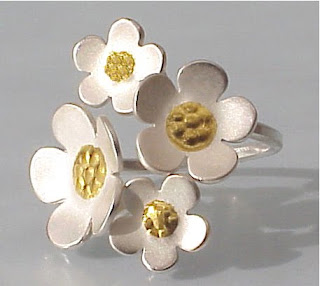 Heading up to San Francisco to attend the Contemporary Crafts Market at Fort Mason, March 10th and 11th. This is my second time I attend this show in San Francisco and I love it! What a town. They say San Francisco is a very European like city and it is all true. Big car traffic and great food and people. Going downhill on a trolley is a thrilling way to ride and view the city. OK - back to the show: the Contemporary Crafts Market is one of the few shows in California that I feel it has remained soundly strong during the years, comparing to several other ones that have lost their integrity. If you are planning to attend, please visit their website at http://www.contemporarycraftsmarket.com/ to get more acquaintance to it; also, if you'd like to visit the show for free, you can email me at info@lupajewelry.com and I will forward you a couple of tickets!
There, I will showcase my newest additions to the LUPA Flowers collection: the BABY Bouquet rings, and Bracelets. Just in time for spring!
And let's remember to change the clock on Sunday 11th! I love long daylight hours!
Happy spring...
Posted by LU.PA at 9:17 PM No comments: 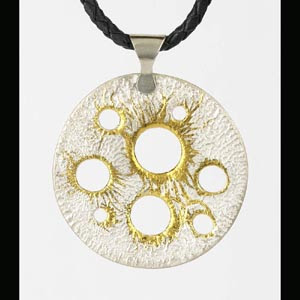 I design because I like it. I can’t stay away from it. Creating…
Shaping thoughts with hands and metals is what I do.

From drawing the design on precious metal sheet to piercing and sawing, filing, smoothing the metal for a velvet touch, yet forging it with hard hammers and shaping it with the hands, sometimes, like a sculpture, LUPA creates contemporary jewelry with style everlasting. All of the work is designed and created in Los Angeles, CA, near the beach.

I came here from Rome, Italy, twice. It’s a long way and I love to travel. I carry with me all I know of my country and my creativity makes me translating it into jewelry.

LUPA Jewelry is handcrafted exclusively of precious metals and may include gems, and pearls. Stones, along with few findings and Italian Sterling Silver chains, are carefully hand selected to assure quality and the pleasure of wearing a one of a kind ornament. Our metal is sustainable and it comes from New Mexico, a small manufacturer in Los Angeles, and our studio in Los Angeles, where scrap is recycled.

Born and raised in Rome, Italy, Lucia has always been surrounded by art, history, and traditions. Her jewelry reflects her passion for culture, nature, and innovation.

Her company name, LUPA Jewelry, and her logo, the Wolf, represent the centuries of history, culture, and tradition of her origins.
The wolf has been the symbol of Rome since its creation, more than 2000 years ago, and LUPA, besides being Lucia's initials, is the Italian word for wolf.
Posted by LU.PA at 1:52 PM No comments: 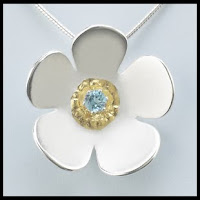 Saturday November 26th, the day after Black Friday, was the second annual Small Business Saturday. It was the day dedicated to American People to rebuild Business made in America by shopping with small businesses that make our communities special.

To support this movement, starting Saturday November 26th and throughout the end of the year, I offer 10% discount on any purchase of LUPA Jewelry made on site or through the Internet.
I am doing my best. I hope you will join me!

As many of you know, I am a small business owner and my business is founded, based and operates in America. I started a couple of years ago and I work to please you with my artistic jewelry creations. Many of you appreciate my work and I greatly thank you for it.
Being a small business, I constantly strive to compete with big commercial chain stores, which can sell a product for a minimal amount of money where quantity is the key or, when high quality goods are sold, they profit greatly. These big businesses can afford to hire manufacturing force at low cost, unfortunately often because the workforce is out of the United States, where costs are lower than here, hence the final production cost is much lower than if it was made in here. This is fine when the World’s Economy is not disintegrating; in these times though, we need our country strong.
Competing with big companies that have their work outsourced is a huge problem for a small business and neither brings money in to or keeps money in our country, where we need it.
Again, I am doing my best.
My main source of the metals I use is from the US. Recently, I added an employee to my small business and in doing so I added a job to the country and I am happy and proud of it!

Have very Happy Holidays and Thank you for your business! 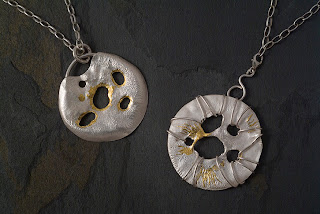 ...Final Update‏- VENICE JEWELRY CLASSES and THE PEOPLE who encouraged and helped me with developing my creative hobby into my career in the jewelry industry.


When I moved into the US from Italy, years ago, I knew my goal was changing my life, especially my working life. I knew I wanted a reward for myself, not money, but something that would realize my desire of expression.

My creativity and my love for rocks made me approach the Culver City Rock & Mineral Club. From there I got the connection to what made my creativity rock, the Venice Professional Jewelry Making Classes. There I learned how to shape my visions into structure. There, I met incredible talented professionals and inventors, who gave me the tools and the courage to get out of the ordinary and out of the box of standards, my instructors Anthony Chavez and Brad Smith, along with numerous other great jewelers, so much in love with this art that sharing tips and knowledge with younger students was a must.

To be added the importance of the cameradery that these classes created. It did not matter how tired or angry or sad I would be, after very few minutes arriving into class, all I could feel was radiant energy.These classes have created a huge amount of good to the community, keeping people out of the trouble and giving them comfort and to many, a paying job.

Too sad to say that today, election day, we got the news that the classes are ended for ever, for lack of funds. I wonder where the government has decided to shift those funds, once dedicated to education...

I thank Anthony and Brad for their wonderful job and I thank all who have contributed in maintaining the classes so full of life and culture.

Anthony Chavez and I have been eagerly awaiting news of the remodeling project to get our jewelry classroom ready at the Emerson Adult Learning Center. Calls to the construction team have gone unanswered, so about two weeks ago I asked our school administrators to help find out our status. The answer today was not good.We all know what budget cuts in 2008 and 2009 have done to our school system, and this year's budget, signed last month, has cut another couple billion dollars. The word from downtown is that there are no construction funds available for our adult-ed class. The question had been elevated all the way to Ed Morris, Director of Adult Education. So despite having classes that were known for long lines to register and that served the needs of the local art community, our doors have finally closed after 20+ years.I will miss our classes tremendously but am so proud of what we accomplished. We've learned a lot and enjoyed every minute of it. Quite a few of you have put together shops to do your jewelry at home, many of you have developed your jewelry as a home-based business, a few are now employed in the industry, and several are well-known artists at top shows.It's been a pleasure to have worked with everyone at Venice,- Brad
Posted by LU.PA at 11:17 PM No comments:

LU.PA
“I love to express myself! When I create my jewelry,
I don’t work with pen and paper or a computer,
I work with my heart.
My feelings flow through my veins into my hands
And they shape the metals and caress the stones
Then – voila’! A new piece is born."

Fine Art Jewelry, designed by a European mind, hand made in America.

Award winner in Jewelry Design and Fabrication, Lucia Pasquinelli (LUPA) creates unique jewelry with distinctive eternal European style. Born and raised in Rome, Italy, Lucia has always been surrounded by art, history, and tradition. Her jewelry reflects her passion for culture, nature, and innovation. Her training includes bench work with a professional jeweler in Rome as well as with master craftsmen in California. LUPA Jewelry is handcrafted exclusively of precious metals and may include gems, and pearls. Stones, along with few findings and Italian sterling silver chains, are carefully hand selected to assure quality and the pleasure of wearing a one of a kind ornament. Our metal is sustainable and it comes from New Mexico, a small manufacturer in Los Angeles, and our studio in Los Angeles, where scrap is recycled.